November 3, 2022
Three in five business travellers report having curbed their flying habits as a result of the pandemic in a new survey by the Travel Smart Campaign conducted by Ipsos.
Download

79 per cent of British employees in the survey believe that a business has an important role to play in the fight against climate change. This was confirmed in a poll of 2,506 employees across the United States (U.S.), United Kingdom (UK), France, Germany and Spain, including 502 from the UK, where an overwhelming majority of employees surveyed in the five countries say that their employer should act in the fight against global warming. To qualify for the survey, respondents had to be employed full-time at an organisation with at least 50 employees and be between ages 18-74.

The survey finds that three-quarters of surveyed employees believe that an important factor for reducing a business’s carbon footprint is curbing levels of corporate flying. While most respondents are willing to make changes to their travel patterns for sustainability, and also believe they have an important role in shaping their company’s travel policies, even more believe businesses must set corporate flying reduction targets. 71 per cent of UK employees in this survey believe that to reduce levels of corporate flying, a business must set targets and include travel policies.

Paul Tuohy, Chief Executive of Campaign for Better Transport, said: “Corporate flying habits have changed. This survey shows that employees want a new normal where businesses take responsibility for reducing their emissions. Just as investment in public transport is of significant benefit to the wider economy with improved access to jobs and services, businesses and employees can now see more clearly than ever that sustainable travel policies are not just better for the environment, but also better for business”.

The survey comes at a time when there is a growing sense that lower levels of business flying are here to stay. Of those who report flying for work currently or before the pandemic [1], 60 per cent say they have curbed their flying habits compared to before COVID-19. Only 24 per cent say that they fly as often as they did prior to the pandemic, with 15 per cent saying they are now flying more. 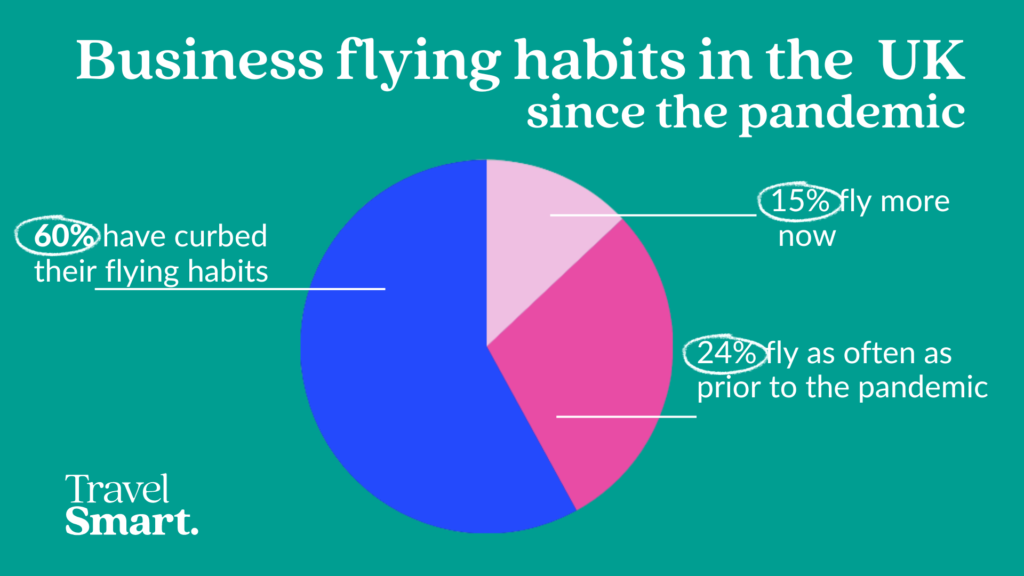 The pandemic has shown the ease with which business travellers can reduce corporate flying, turning to expanded choice in other low-carbon alternatives. When asked their preference for how to reduce the environmental impact of business air travel, business travellers in this survey were most likely to say they prefer virtual collaboration technologies (56% of respondents). Less frequent flying (33%) and other means of transport (30%) received around a third of intentions.

The shift toward collaborating remotely is predicted to have a great impact on the return of internal meetings [2]. A large majority of business travellers in this survey (72%) say that they are willing to take fewer business flights for internal meetings in order to reduce their environmental impact. 67 percent of business travellers in the survey report they are willing to plan more local meetings than global meetings, and therefore potentially avoid long-haul flights.

“Employees understand the climate impact of flying and are willing to curb their travel. But they expect top management to lead by example and set ambitious business travel reduction targets. These shifts in attitude should also be recognised by the Government: this evidence presents an alternative vision to help decarbonise the industry that doesn’t assume continued growth in business travel,” explained Florence Long, from AEF.

“Corporate leaders who claim to care about the climate should first examine their own flying habits, and seize the moment to pledge to keep their company’s air travel to under 50 per cent of pre-pandemic levels, as a key measure to cut corporate emissions”, concluded Elspeth Wray, Transform Scotland.

Stop greenwashing your way to Davos

Euractiv: Cheap flights are in demise – but why?

Context News: As leaders fly to Davos, how do private jets affect the climate?

This website stores cookies on your computer. These cookies are used to collect information about how you interact with our website and allow us to remember you. We use this information in order to improve and customize your browsing experience and for analytics and metrics about our visitors both on this website and other media. To find out more about the cookies we use, see our Privacy Policy.